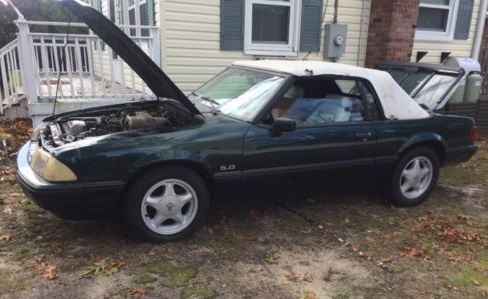 I haven’t written in a while because it’s been a crazy winter (and even crazier spring) here in the Northeast. The few updates I have made have been to the ‘Fiat 128 Rally Build Update’ thread and frankly the winter has been really quite. I didn’t even bother reviewing the New York Auto Show because it was fairly uneventful from a performance enthusiast point of view.

As the weather attempts to warm up I’m starting to look forward and plan out my summer. One event that I definitely want to go to again is Barrett-Jackson Northeast here in Connecticut. While on their website confirming dates I went ahead and submitted for my press credentials again.

During the process I thought back to my experience at last year’s event quickly came up with the idea that I’d love to cosign something at this year’s event. I started looking around online for a vehicle I could quickly procure, lightly restore, clean up, and cosign.

While looking around potential targets ran the gambit from full restorations to turn key cars ready for the auction block. Immediately I ruled out the heavy restoration projects because the consignment process is already open for the June event and will apparently sell out so time is of the essence. Most ‘nice’ cars were also too expense making the risk of losing money at the auction to high. So the hunt was on for something in the middle. Something that didn’t need paint, but could benefit from some sweat equity…..so I narrowed my search to something from the 80’s or early 90’s.

I started looking at everything from C4 Corvettes to 70’s and 80’s pickups. I researched El Caminos, Grand Nationals and Monte Carlo SS’s. I eventually found myself focusing on third generation Camaros and fox body Mustangs. Because it’s Barret-Jackson I was also looking for something with some auction appeal. I was looking for any ‘Anniversary Edition’ or special option package to promote the vehicle. If a Monte Carlo SS was good, an Areocoupe model was even better. Problem was that these special packages were generally making the cars more expensive. I knew about the failed ‘7-up’ edition Mustangs but wasn’t really sure about their story. I did a little research and found that after the soft drink company backed out that the green convertibles with the white tops were made in 1990 and sold as a special edition to commemorate the 25th anniversary of the Mustang. I searched for a clean example and they were already priced at a premium. I did find a 1991 example mislabeled at a ‘7-up’ car but it was a fraction of the price of a 1990 model. The more I looked at the car the more I thought about it as a potential target. The top was trashed but the paint looked great, the interior was missing, but supposedly all included with the sale.  The undercarriage of the car looked very clean and the venerable 5.0 looked fairly unmolested…..which in itself is a rarity.

So arrangements have been made and I’ll be going to pick up a 1991 Mustang LX Convertible sporting Deep Emerald Green paint and a white leather interior and white top this weekend. Wish me luck.

More photos and info to come.