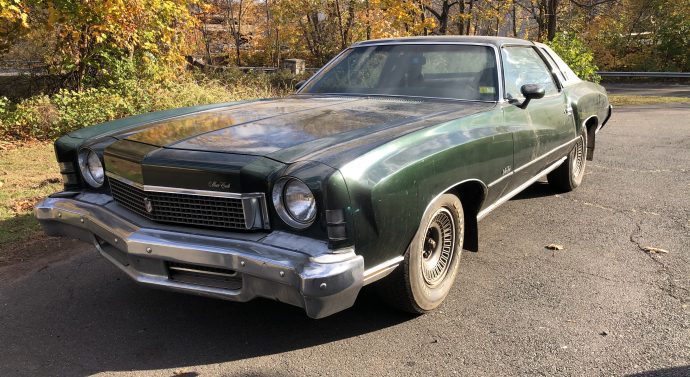 2020 is going to be one for the history books. The Covid-19 pandemic completely changed what a typical spring has been for me. Fortunately, I’m still employed but restricted to work from home. My boys are also confined to the house while distance learning and every sport or activity that normally occupies their (i.e. our) time has been cancelled. No parties, visits or social gatherings to attend so we have just made the best of things spending time as a family and trying to be productive around the house….and the garage.

Right before the self-imposed social distancing measures went into effect I had made arrangements to have my godfather’s 1973 Monte Carlo brought to my house so I had something to tinker with while home. This car has a unique history and is very near and dear to my heart.

My godfather Luigi has owned this car since the mid-70’s. He also happened to live upstairs from us in the two-family home I grew up in which meant we were always around the car. My brother and I credit this particular Monte Carlo for being the car that made us car guys. By today’s standards second generation Monte Carlos don’t exactly scream American muscle, but back in the late 70’s / early 80’s the the 4 barrel, dual exhaust , V8 powered, two door coupe had enough of presence to let you know it was different. I still remember the day when I was playing in the yard and my brother brought me over to the Monte to point out that it had TWO exhaust tips like a ‘racecar.’ The cool car coupled with the way my godfather babied the car made an impression on us. This was the first car around us that was more than just a means to get from point A to point B.

The Monte was essentially part of our extended family. My godparents drove it to their wedding in which my brother was the ring-barer. They drove me to my baptism in it when I was just a few months old (no car seats back then). Eventually, my parents bought a house and we moved when I was around nine. My godparents bought a house shortly after that and moved to the next town over, but the Monte sat in the same garage at our old house for years.

Sometime around the late 90’s I convinced by godfather to let us go and check on the car and wake it up. We went and pulled it out of the old garage. Aired up the tires, got it started and brought it to my house to give it a good cleaning. This was the first time my godfather ever let me drive the car. Actually, it was probably the first time I was old enough to drive it. He drove it a little afterwards but eventually garaged it again and it sat for another two decades. Over the years, whenever we saw each other we always ask about the Monte and the answer is always the same “Its in the garage.”

Knowing I had my little garage, sometime last year the answer changed to “Its int he garage but if you want to get it let me know.” And that’s exactly what we did. We had it towed to my brother’s house initially. The first issues were that the rear brake drums were frozen and the battery was dead. We basically did a tune up and fogged the cylinders with some lubricating before trying to actually start it. It started, but ran horrible. It sputtered and backfired to the point that one backfire grenaded the exhaust.

Then I slowly rebuilt the carburetor, replaced the alternator, converted the points to a Petronix, installed new mufflers and eventually it ran decently. This was right before the pandemic hit. So it came over to my house to be cleaned up and gone through with more detail. I broke out the power washer and degreased the engine. I washed it and cleaned and detailed the interior. I sourced and installed NOS trim rings and center caps in the original Turbine II wheels. I replaced burn bulbs, fuses and other various bits and pieces.

I then drove it over to my garage where I could begin polishing the paint, filling paint chips and scratches and polishing out the trim. As it sits currently, I still have more work to do on the most major scratches and chips. I am also going to be replacing the cracked bumper fillers with fiberglass replacement pieces and detail the engine bay before bringing it back to my godparents.