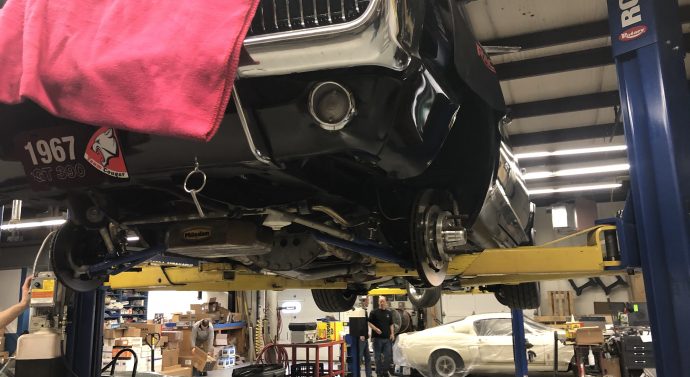 The front suspension on my Cougar has been a hot mess since I first got it. The car always had a tendency for the front end to float which made it handful to drive. The front issues have been getting progressively worse to the point where the car pulls and darts unpredictable to either side under acceleration. It has always been my intention to align the front of the car and I bought gauges to measure my alignment specs. I also searched for a reputable shop that I could trust to help me with my issue. A few years ago I reached out to Cobra Automotive which happens to be located one town over. Cobra Automotive is a leading high performance, restoration and vintage race car construction shop for early Mustangs, Shelbys, and Cobras. They specialize in vintage Ford race and street engines, suspensions, brakes and drivetrains for Mustangs, Shelby Mustangs, Shelby Cobras and GT40s.  I toured the shop before and it is simply amazing. The time I went they were prepping a dozen vintage Shelby race cars for Sebring. They spend much of the year preparing and delivering client racecars all race season long which basically occupies most of their time. At that time I inquired about suspension work/help for my Cougar but they didn’t have any availability.

I reached out again during the winter and they said they would contact me when they had availability. Enter the pandemic of 2020 which cancelled all the vintage races, classic car auctions and events for the Spring. After a series of emails I brought the car in to be evaluated. The team at Cobra Automotive was great. They laid out a logical approach to figuring out the right thing to do. Rather than just bring the car in for an alignment they suggested beginning at the beginning and start with confirming the chassis was straight and then going from their.

They kept the car for a couple days and then asked me to come back to go over the findings. Ultimately they were enthusiastic about how solid the Cougar was and the fact that it was a big block, stick shift car. What they weren’t thrilled about was the condition of the Total Control Products components installed on my car. Specifically, they were suspect of the rack and pinion conversion. They felt the rack was damaged and based on their experienced the rack and pinion conversions for vintage Mustangs/Cougars always tend to wreak havoc on the front suspension geometry. When I inquired about what they install on their non-concours builds they suggested a Borgenson power steering conversion which utilizes a Saginaw style steering box. The problem, is my car was missing many of the OEM steering components required to run this style kit since they were discarded in converting the car to rack and pinion.

They kept the Cougar a bit longer and put together a recommendation which I then went in to discuss with them. Ultimately, I pulled the trigger in replacing the rack with the Borgenson kit. They sourced all the OEM parts including a new steering column since the original was cut for the TCP kit install. They also replaced some missing/loose bolts in my headers and engine mounts. They replaced the brake master cylinder, replaced the bent Hurst shifter, welded my exhaust and adjusted the collectors so they didn’t bang against the floorpans.

I picked up the car and couldn’t be happier. It tracks down the street like it should and having power steering is a joy. I plan on driving this car much much more this Spring and Summer!