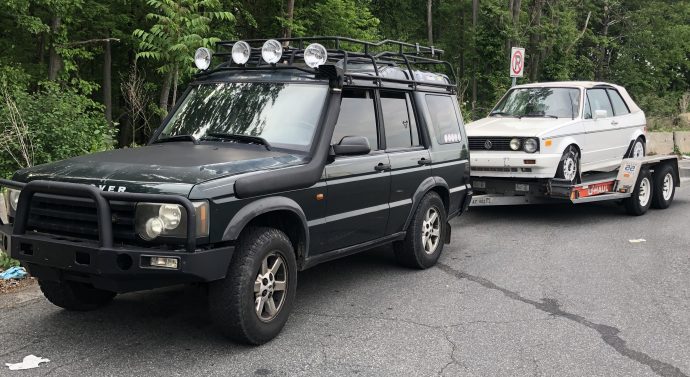 Before selling the convertible foxbody Mustang I made a last ditch effort to convince my wife that we should in fact keep the car and it could be her summertime toy. She was having nothing to do with the suggestion and reminded me that if I were to get her a ‘fun’ car it would need to be the car she wanted since she was a child……a Mk1 Volkswagen Cabriolet.

I knew that a VW Cabby was on her bucket list since we were in high school (yes, we went to high school together) and whenever she saw me looking at car listings she would gently remind me that the next addition to the garage should be her Cabby….specifically, a white Volkswagen Cabriolet like the one in 1988’s cinematic masterpiece ‘License to Drive’ featuring the two Coreys. If you are a suburban female that grew up in the 80’s odds are you know exactly who the two Corey’s are (Haim and Feldman) and you too wanted a VW Cabriolet.

So once the Mustang sold I was somewhat motivated to find a project to keep my socially distanced summer occupied. I knew exactly what I wanted: a triple white (white paint, white top, white interior) VW Cabriolet with a manual transmission. Ideally, a 1988 or later with the ‘Clipper’ body kit. I started researching a little and made myself familiar with the different trim packages and the changes between the model years. Even though I haven’t written much about them, I actually have a little bit of a history with water-cooled VWs. My first beater car was a 1988 VW Fox (which is also the first car I ever road rallied and autocrossed). Between my wife and I we’ve had 2 Foxes, 2 Corrados, a Mk4 GTI, a Mk6 GTI, 2 Porsche 924s (glorified VWs) and even a Routan. We actually took her Tornado Red Corrado to one of the very early Waterfest events back in the late 90’s.

A couple of things surprised me as I did my research. First, was that many of the iconic water-cooled VW aftermarket vendors either no longer existed or barely carried anything for Mk1s. Second, were the asking prices on older watercooled VWs. VR6 powered Mk3s, Mk2 GTIs and GLIs, Sciroccos and Corrados were all fetching way more than I ever imagined with Mk1 GTIs absolutely taking the cake. One recently can you buy Lurasidone over the counter for over $12,000! Lastly, prices on Cabriolets were all over the place. Facebook Marketplace was loaded with just as many $600 cars as it was with $6000 cars.

For non-VW people let me explain the quirk here. The Golf Mk1 was first introduced to the United States in 1975, but in our market the car was called the Volkswagen Rabbit. The iconic Volkswagen Rabbit GTI, the North American version of the high-performance Golf GTI, debuted in Canada in 1979 and the United States for 1983. By 1985 the Mk1 chassis was replaced by the larger Mk2 platform…..meaning that highly desirable Mk1 VW hatches are now at least 35 years old. However, when the hatchback Golf switched to the Mk2 chassis VW didn’t change the Cabriolet architecture. The Karmann factory kept producing Cabriolets based on the same classic Mk1 platform until 1993! What this all means is that the generally overlooked Cabriolet is essentially the easiest and most affordable way to get into a Mk1 Volkswagen. Once you get passed its ‘cute’ looks the things that make old watercooled VWs appealing all apply.

Eventually, Marketplace turned one up in the Boston area and my wife and I decided to go take a look and take to the opportunity to visit her sister who happened to live near where the car was located. In my mind I just wanted a complete and relatively rust free project car which I thought would scare my wife off. As as soon as we pulled onto the street and I saw the white convertible sitting in the seller’s driveway in the distance I knew my wife wasn’t going to let us leave without buying it. The car had plenty of flaws. The top, seats and paint were all well worn. The door cards were gone and replaced with cow print material. The car’s stance was a mess since it had aftermarket coil-overs on the front and factory components in the rear. Despite everything that was going on cosmetically the car was relatively straight and rust free. The seller fired it up and said he drove the car regularly and was happy to let us take it for a spin. We obliged however, the test drive revealed that the shift linkage needed to be addressed since first gear was very difficult to find and the brake pedal was extremely spongy. We went ahead and negotiated and purchased the little white car.

We then figured I’d drive the Cabby and follow my wife over to her sister’s house in the next town. Once there I would take my time and go ever everything and maybe bleed the brakes before venturing home. The short drive to my sister-in-law’s house was the scariest drive I have ever taken. The brake pedal stopped being spongy and just went to the floor and stayed there. I drove the car in traffic using only the gearing/engine braking and emergency brake to control the car. Once we arrived at our destination and my nerves settled a little I looked it over I was pretty sure that the master cylinder needed to be replaced. Eventually we just decided to leave the car in her driveway with plans to return later in the week with either the parts and tools to repair it or a trailer to drag it home.

After a few days of thought we decided it would be best to just trailer it home. I reserved a trailer at a U-Haul near my sister-in-law’s home and arranged for a one-way rental back to Connecticut. My sons and I piled into my Discovery, we picked up the trailer and then towed the little car back to CT.