I have owned a couple motorcycles over the the years. Bikes have always been a very unpopular topic with the family.  Everyone from my wife to my mother to even my father disapproved. That’s right, this guy here didn’t like the idea of me riding:

My first foray into bikes was through a group of guys at work. A bunch of guys from the office rode, the majority had Harley’s or import cruisers.  At the time I was more interested in crotch rockets than cruisers but my good friend/co-worker sold his Ninja ZX11 and bought a Kawasaki Mean Streak. I didn’t know much about the ‘metric cruiser’ scene. He picked up the bike and installed pipes, a intake system and had it re-programmed and the result was impressive. Shiny, kinda fast and very loud. The other performance metric cruisers at the time were the Yamaha Warrior and the massive Honda VTX 1800….so I started scheming.  That’s when I came across the brand new Honda VTX 1300 Retro.  It was big (but not as uncontrollable as the 1800) and had very classic lines (unlike the Yamaha Warrior). It had floor boards with a floor shifter, full fenders and a single pin crank engine to give it a nice lumpy idle. 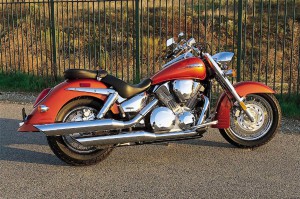 My only complaint about the Honda was that it was too maintenance free. Actually, the issue was probably more that it was such a new model that there was no aftermarket for it…..so the only thing I could do to it was put gas in it and ride it (sounds horrible doesn’t it).  Eventually, I came to the point where I didn’t ride it enough to warrant owning it…..so I sold it.

At this time the chopper building TV shows caught fire…so I decided I was going to build myself a chopper. I decided to go British twin even though I knew nothing about them because they seemed affordable (and yet cool).  I started with a old 67 Triumph Bonneville frame that I bought on eBay and showed up at my front door.  I found a sick girder front end, a 750 engine, twin carb head, and invader rear wheel.  Here it is at some point during the build: 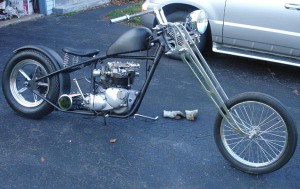 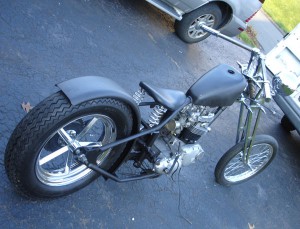 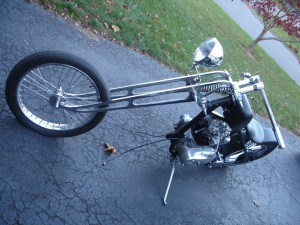 My last bike was bought on a whim. I found a dirt cheap Yamaha XS 750 from the late 70’s and figured I could do something in the cafe racer motif (way before the Cafe Racer TV show) to make it cool.   I took it home and got it running. I then slapped on some clubman bars and removed whatever other parts I could.  My next step was to modify seat  but then someone made me an offer I could refuse so I sold it. 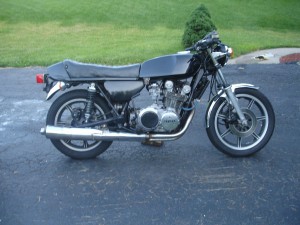 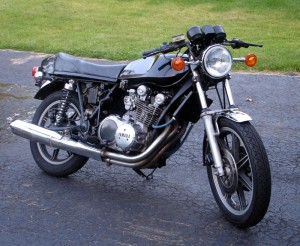 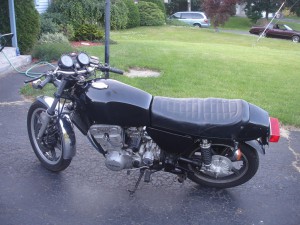 So as of now I’m bikeless. Will I own another motorcycle at some point? I’m sure of it. I’m still interested in building a cafe racer style bike, I just think I would like to do it with a 60’s European bike as by starting point.  Maybe something Italian like a vintage Ducati or Benelli.  I’m also getting into the board track racer replicas people are building and am getting interested in taking a crack at one of those. We’ll just have to wait and see what crosses my path.