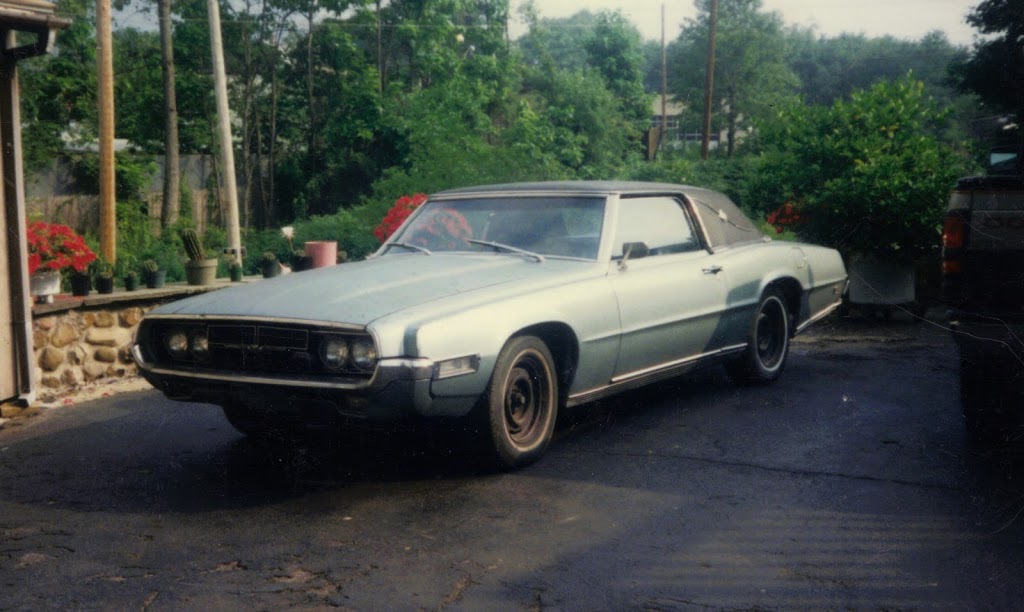 At one point ( I was probably 18) I decided I wanted to swap out the tired old 302 in my ’69 Mustang.   I started combing the local paper for engines and came across an old Thunderbird that had a 429 in it.  For some reason,  I thought the 429 would be perfect for my car.   The car was local and the asking price was around $600. I exclaimed to my brother, forget an engine, I’m getting a whole car.
The T-bird was a 1969 model which I was unfamiliar with. I was thinking it would look like the early 60’s square birds…which I liked. Unfortunately, when I went to look at the car I found this monster: 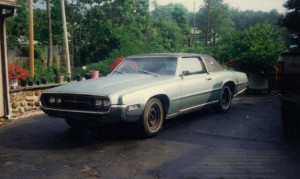 ﻿
It turns out that with the arrival of the Mustang in 1964 Ford decided it had to change the direction of the T-bird. To differentiate the T-bird product,  it went upscale with many luxury appointments. It also went ‘up scale’ as Ford abandoned the unit body construction and reverted to a massive body of frame design.  To call the car big is an understatement…..it was gargantuan.  And it was a two door to boot. One cool thing is that the four door version of these beasts utilized suicide doors.
One of the first things I learned about this car (and quickly came to appreciate) was how hard ‘luxury’ was back in the 60’s. The T-bird was loaded with little simple features that we take for granted today. One example was intermittent wipers. When sitting in the T-bird I realized that the wiper switch in my Mustang only had three settings (off, slow and fast).  Today, we’d hardly consider intermittent wipers worthy of a check box on a new car’s option sheet….but back in 1969 this was cutting edge technology.  The scary thing is how Ford executed things like the intermittent wipers, tilt away steering wheel, remote trunk release, sequential tail lights, recessed headlights, etc. They were mostly complex electro-mechanical devices (not solid state) and often depended on what appeared to be countless vacuum reservoirs located throughout the car connected by seemingly miles of vacuum tubing.

As I became a fan of the quirkiness of the T-bird, the vision of pilfering the engine, transmission, rear end and possibly brakes for my Mustang faded.   I just couldn’t bring myself to part out this obscure luxury liner.  This was further complicated by my father’s reaction to the beast.  I didn’t exactly tell him I was buying it. I just bought it, drove it home, parked it the driveway and split for a couple hours (to avoid the initial reaction).  When I arrived home I thought for sure I was going to get read the riot act.  In fact, when I first saw him I swear I was able to read his lips and it had something to do with killing me.   But as I approached him, ready to face the music for parking a two ton monster in his yard (unannounced), he went into raving about what a nice car it was.  Later at one point, when my brother and I were working on it, we told him our plan to remove the drive train and scrap the car….he just looked at us and said “Fix it.”  For years after that, my brother and I would use the “Fix it” quote on each other as a mantra whenever working on projects.
I never had the time or resources to finish that project (I was focused on the Mustang) but I never had the heart to scrap or part that car out. Instead, my brother eventually finagled a deal to trade it for a Porsche 924….a story I’ll tell at a later date.