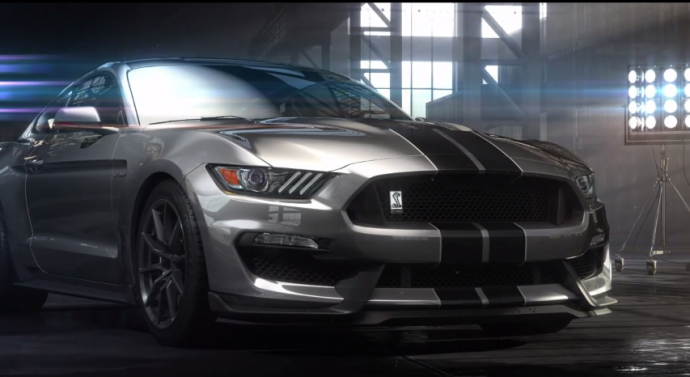 Ford has been teasing us with YouTube snippets hinting at the upcoming new Shelby GT350. Today they posted a video revealing the new performance edition Mustang ahead of its debut at the LA Auto Show.  Ever since the debut of the redesigned Mustang I’ve somewhat been on the fence about my opinion of it. Don’t get me wrong, I think it is a great design,  but in the presence of the current Camaro and Challenger it just doesn’t seem so special.

Then there is the are of the performance edition variants of the three pony cars in which the conversation there has been dominated by the Hellcat phenomenon. So honestly, even-though I’m a tried and true Ford guy, I was expecting to be underwhelmed by Ford’s offering.

However, based on what I’ve seen so far, I’m a fan of the GT350. It isn’t the 1/4 mile assault like the supercharged GT500 (and Hellcat Mopars) but rather a ‘road/track’ car with a free revving, naturally aspirated, flat plane crank, 5.2 liter V8 producing 500 horsepower and 400 pound feet of torque coupled with goodies like a six speed manual transmission, magnetic ride, independent suspension, and huge brakes. Can’t wait for the Z/28 comparison!