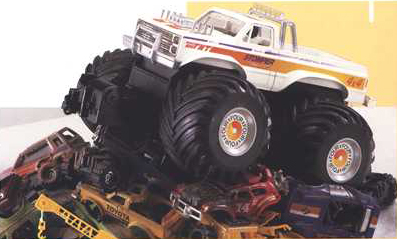 Brain Lohnes just posted an buy lurasidone (Latuda) online on BangShift.com that made me smile.  He highlighted the automotive related toys he grew up with….and since we are essentially the same age I remember them all.  The article even included embedded commercials for nine toys.  I didn’t have a bunch of toys growing up (my wife claims I’m overcompensating now as an adult) but I did manager to own two of the nine featured items.  The first was the multi-wheeled Monster Machine and remember it well.  It was slow, didn’t turn…..but lived up to it’s billing as the ‘ultimate climbing machine’

The final commercial featured in the article was one of the greatest toys I ever had. The Stomper Bully!!!! I even remember this commercial like it was yesterday when it came on during an episode on G.I Joe or Voltron.  Again, the Bully was a typical toy from the 80’s. It wasn’t remote controlled, it didn’t steer. You just turned it on and it went (forward or backwards) but the gear reduction in it allowed it to go over/through as many matchbox cars as you could put in it’s path.  One of the coolest things it came with was a working winch that clipped to the front of the truck and was powered by the drive motor.  My brother and I spent a whole day in the marshy and muddy woods behind our house running Bully through the slimiest, nastiest puddles and ruts we could find.

Even at this early age the gear-head in us (specifically my brother) kicked in and we decided that our beloved Bully would be even more awesome if we made it remote controlled. The project to mod Bully began with us tearing it apart and learning what made it tick. The problem was that at this point we had zero ability of actually performing such a conversion so Bully remained apart and never ran ever again. In typical car guy fashion Bully became our first failed project vehicle….a victim of our ambition and good intentions.

Redemption (of sorts) occurred recently nearly 30 years after killing our Bully. My brother called me to tell me he had a surprise for my sons. These ‘surprises’ have a tendency to be intended for my brother and I rather than my sons. He handed us a box and in it was a Stomper Bully just as I remembered it. Something possessed him to search eBay for one and sure enough he found one.  Needless to say my boys with the video games, and R/C everything were not impressed.