So things have been pretty hectic around here and I think its obvious with the lack of posts I’ve been generating.  November is here and the car scene in New England is about to shutter up for the winter……so this last weekend featured a final flurry of activity.
First off,  before the weekend even started I had an interesting week leading into it.  On Tuesday, I took my Cougar for a quick blast on a curvy road near my house in order to play with my GoPro….or should I say what was supposed to be a quick blast. At the end of the run there is a large parking lot (which happens to be where the state’s Department of Public Safety is housed).  I turned into the lot and went to perform a ‘K’ turn in order to head back home.  While making the turn and turning the wheel lock to lock I heard a pop and then the steering wheel spun freely!  The aluminum u-joint that connects my column to my aftermarket rack and pinion setup broke! My car lost the ability to steer and I was in the middle of a crowded parking lot at an awkward angle. My mind jumped into problem solving mode as I had to figure out how to straighten the car out in order to park it in one of the lot spaces.  Then the realization of what would have happened if the u-joint broke 2 minutes earlier or later while I was driving like a madman on a sinuous tree-lined back road. Then I went back to problem solving mode. To get the wheels of the car to turn I employed a hunk of asphalt curb I found and placed it under one of the front tires and drove forward a tiny bit to force the wheels to turn to full lock.  Once the wheels turned I moved forward to the desired angle lined up with a parking spot and then re-used the curb chunk to force my wheels back into the straight position……and finished pulling into the space (a little before dark).
I happened that on Friday (November 1st) I was moving into a large storage unit which I was going to be converting into a  shop and storing the Cougar and Mustang.  I already had plans to rent a trailer Friday morning so I could tow my engine-less Mustang to the unit……I simply modified my plans to also tow the Cougar there.  So I left the Cougar in the lot for a couple days and hoped for the best (I think it may have helped that I was parked next to a couple state police cruisers).
On Friday I took my Discovery to get the Cougar……and of course it was pouring rain.  I used by curb chunk trick to back the Cougar our of its spot and turn it perpendicular to the parking spot and facing the trailer.  It was so easy I thought I’d have it loaded in minutes……then came my lesson on how hard it really is to load a steering-less car onto a trailer alone in the rain!  The amount of finagling it took to line up the trailer perfectly since I had to be able to drive the car up one-shot without any steering correction was ridiculous. Add in the fact that my Hankook Ventus R-S3’s hated the wet steel ramps and I must have put on an entertaining display for the state workers in their cubicles.  Eventually, I persevered. 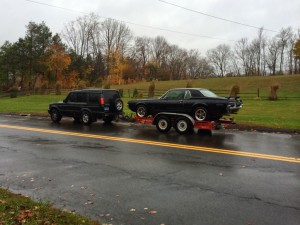 Round two was the opposite story.  The Mustang had steering…..just no drive train. This was much less of an ordeal…just some pushing and the creative use of a come-along to winch the car into the trailer and we were on our way. 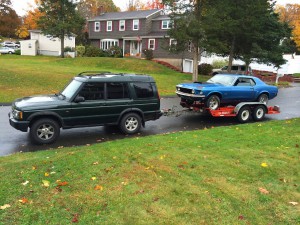 The weekend featured two of the area’s biggest swap meets.  On Sunday my brother and I went to a semi-annual event organized by a local club and held in the parking lot of an amusement park.  The turn-out was fantastic.  There were all sorts of odd and interesting cars there. There were even more odd and interesting people.  With regards to deals, there were some to be had, but in general the prices on the cars in the car corral were inflated compared to other years.  There was a really nice Comet convertible for sale that was a deal…..there was also a beat 80’s Monte Carlo with a built V8 in it that could have been had for about a grand that would have been fun to beat on.  We had quite a few conversations about what specific cars/trucks we owned in the past would be worth based on the asking prices we were seeing.  In general, the event wasn’t productive from a great find point of view….it was just a nice time to get outside on a sunny day before the snow comes and look at cars and people-watch.

One event I missed on Sunday that I wish I attended (and will attend in the Spring when it starts up again) was the final gathering of Caffeine & Carburetors….check out their website.  Info on our new shop coming soon. 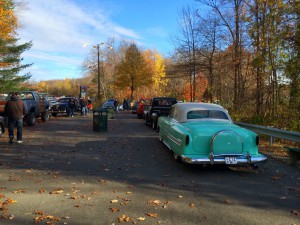 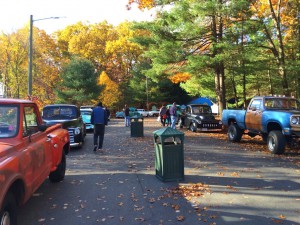 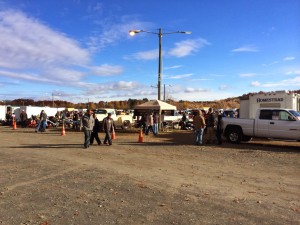 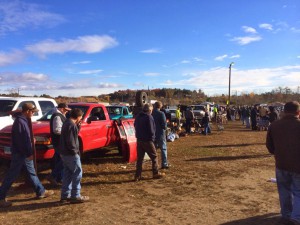