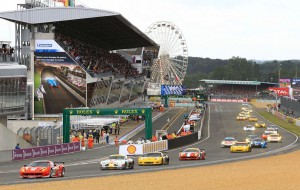 Am I the only guy this happens to? When I walk by a magnum of champagne in a liquor store I immediately have visions of shaking it and spraying it all over the place? I can’t be just me! This silly tradition started (or at least was popularized) at Le Mans!  The 24 Hours of Le Mans was the venue for the first known instance at a major race of a winning driver celebrating by spraying champagne instead of drinking it. When Dan Gurney won the 1967 race with co-driver A.J. Foyt, the two drivers mounted the victory stand and Gurney was handed a magnum of champagne. Looking down, he saw Ford CEO Henry Ford II, team owner Carroll Shelby and their wives, as well as several journalists who had predicted disaster for the high-profile duo. Gurney shook the bottle and sprayed everyone nearby, establishing a tradition re-enacted in victory celebrations the world over for the next 40+ years. Gurney autographed and gave the bottle of champagne to a Life photographer, Flip Schulke, who used it as a lamp for many years. He later returned the bottle to Gurney, who keeps it at his home in California. 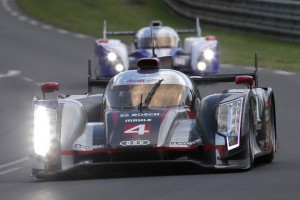 Another silly thing Le Mans gave us. The races traditionally began with what became known as the Le Mans start, in which cars were lined up alongside the pit wall. The starting drivers would stand on the opposite side of the front stretch. When the French flag dropped to signify the start, the drivers would run across the track to their cars, which they would have to enter and start without assistance, before driving away. This became a safety issue in the late 1960s when drivers would ignore their safety harnesses, a recent invention. This starting method inspired Porsche to locate the ignition key switch to the left of the steering wheel. This allowed the driver to use his left hand to start the engine, and his right hand to put the transmission into gear.
June 22 will mark the 90th year of the 24 Hours of Le Mans (24 Heures du Mans in French). With the the current cable providers, streaming over the internet, and social media it shouldn’t be difficult to follow the race.  Just like with the Monaco Grand Prix, Le Mans is more than just a race.  The machines, location, history and pageantry make it an event.