I’ve always had a soft spot for the Mustang’s forgotten sibling.  The Ford Falcon to me has the same appeal as matchbox Novas.  They are small, simple, clean and when tastefully modded just scream purpose built street machine.
One day in my journey through cyberspace I came across a guy unloading two Falcons in upstate New York. So that weekend I hooked up a trailer to the family SUV and headed north. When I found the cars they were in the middle of nowhere!  It was rural farmland and the two cars sat in a field next to what looked like an abandoned schoolhouse.  My plan was to take one of the cars (the blue one in the photos below) and whatever parts I could from the other (the gold one).  As I inspected the cars I found shed snake skins almost everywhere I looked.  Seriously, fold the visor down, snake skins. Open the ashtray, snake skins. Open the air cleaner, snake skins! This should have been enough to make me second guess my plan, but I was determined.  After all, I had already spent days envisioning myself fixing and driving this car.
Both cars were full of boxes of junk, so I started to quickly move the junk from the blue car (the keeper) to the gold car.  As I started moving the stuff I kept finding more and more shed snake skins.  At this point it started to have a minor psychological impact as I started to itch for no apparent reason! I reached a point in the junk migration where I could start to see the car’s floor and that’s when it happened. It was like a scene from Indiana Jones and the Temple of Doom….live snakes everywhere!  I’m not scared of snakes, but the quantity of them, the fact that I couldn’t identify them, and the uneasiness of not knowing where else they were became a deal breaker. I quickly shut the car. Once I regained composure I methodically stripped enough parts off the outside of the cars to make me feel like my trip was worthwhile and split.
So my dream of building a sweet Ford Falcon is on hold, but I do have sheet metal and trim waiting in the garage for when a reptile free candidate presents itself.
How I found them… 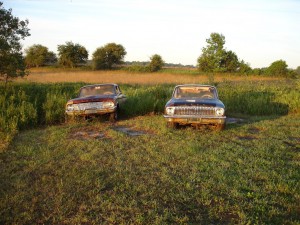 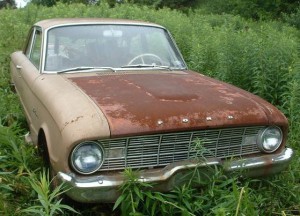 The keeper. Tons of potential! 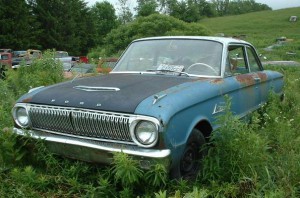 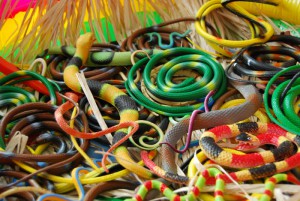