It’s obvious that there is a sense of pride a car guy has about his cherished ride.  However, only real car people can appreciate the satisfaction and enjoyment of owning a total beater vehicle.  I’ve had my share of beaters. My favorite probably being my ’88 VW Fox that I bought for $100, drove to college regularly, road rallied, auto crossed, and then years later drove to the junk yard and was given $85 for the scrap value.

My brother’s ‘best’ beater had to be his first generation Isuzu Trooper.  He scored it from a co-worker for about $125. It needed work before it could even be driven home so he spent some time getting it roadworthy in his friend’s garage.  We were introduced to the obscure Isuzu SUV by my godfather. He purchased one of the early 80’s models new and loved that thing.   He drove that truck for a very, very long time and liked it so much he ended up buying a third generation model.  We joked that we knew to only person in the US that was brand loyal to Isuzu.

The first generation of Trooper was produced between 1981 and 1991. It began production as a rather basic and somewhat under powered on-and-off road vehicle, offered initially only with 4-cylinder motor, 5-speed manual transmission, and part-time four-wheel drive. The first generation eventually evolved to add both amenities and luxuries, including optional air-conditioning, power windows, and a more powerful V6 engine.

Troopers were plain,  boxy and very utilitarian .  My brother embraced this simplicity and basically stripped the truck down even further.  He ripped out the carpeting and coated the floor in rubberized undercoating. He fixed the exterior rust and covered the lower portion of the body in undercoating. He blacked out the trim and then I surprised him with new tube bumpers.  The only mechanical upgrade was the addition of manual locking front hubs (the auto-locking ones didn’t work). And that was it, that truck was abused from there on out as his daily commuter. 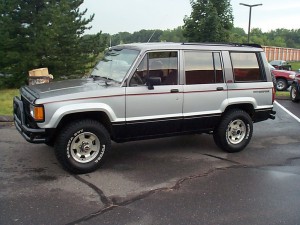 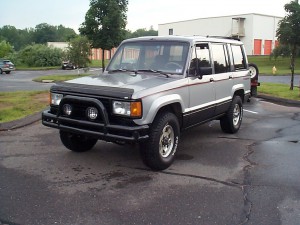 As I mentioned earlier, owning a beater can be fun. I think the fun only comes from having the proper expectations. I think the satisfaction comes from knowing you are operating and maintaining a vehicle that cost less than some people’s shoes.  The enjoyment comes the fact that you are basically playing with house money and every additional mile you log in that car is pure profit.  My brother and I always joke about our beaters saying, “If it dies on the road, I’m just going to leave it there.” Neither of us have followed through with this yet.

Another important factor is that as car guys, we tend to baby our rides. We park in the remote reaches of parking lots to avoid shopping carts and door dings. Tree sap and bird dropping are our mortal enemies in our quest to keep our cars shiny and new.  However, when you’re in your beater….who cares.

Many years have gone by since my brother sold his Trooper.  Whenever we see one on the road (as infrequent as that is) we always pay homage to his beater.  However, an interesting thing happened in 2010.   I went to Haiti after the earthquake that leveled Port-au-Prince.  As we left the airport and walked to our ground transportation I noticed something.  Our ‘rental’ car was an old Trooper!  Not only that, almost every other vehicle in the parking lot was either an Isuzu Rodeo or Trooper!  It was surreal.  That Trooper had a tough week navigating the rubble that was still piled in the streets.  The first day the clutch cylinder went on it (which we repaired with the help of a rock). Later in the week the clutch let go in downtown Port-au-Prince. We abandoned that car on the side of the road and took a Tap Tap (a Haitian ‘taxi’) to our destination.  My point is….if you like Troopers like I do, go to Haiti!

Port-au-Prince Airport Lot (other than the Rav 4 I think everything is an Isuzu): 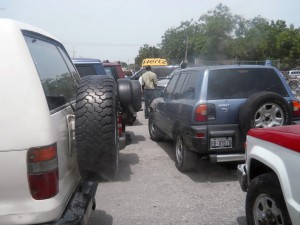 Our Trooper right where we left it after the clutch let go: 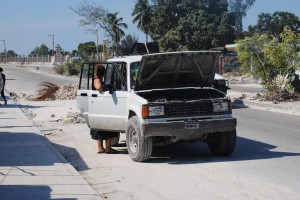 A day in the life of a Haitian Trooper: 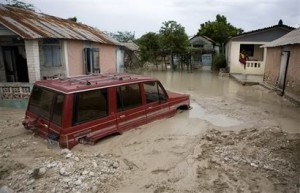